This is a highly functional power controller for 3-phase power heaters. 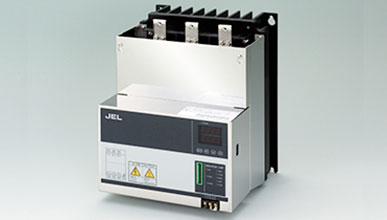 The IP3 Series is a highly functional power controller for 3-phase power heaters. This controller is standardly equipped with various functions, and various optional warning functions of safe design can also be provided. The settings can also be performed easily from the front keys or an external setting device (volume), and the rated current corresponds to a wide range from AC20 to 100A.

The relationship between the set input and output voltage can be set. The gradient can be set by either the front keys of the unit or an external setting device. The control characteristics are the following (1) to (3) depending on the setting.

Even when the set input changes suddenly, the output changes gradually to suppress the inrush current.
The soft-start / soft-stop times can be set individually from 0.1 to 99.9 sec by the setting keys.

The output can be set when the set input is at 0%. This setting can be performed by the front keys of the unit. (The base-up setting is enabled when the lower limit of the output limiter is set to 0.0.)

The upper limit and lower limit of the output can be set.

This function is for limiting the output only for the time arbitrarily set when the power is turned ON or control is started.
This function is effective for heaters where an inrush current flows (halogen lamps, platinum, tungsten, molybdenum, etc.).

Control Start (RUN) / Control Stop (STOP), Automatic / Manual switching, and alarm interlock canceling can be performed externally by a non-voltage contact.
This series is standard equipped with warning functions, including reversed-phase detection, abnormal power supply frequencies, and FAIL. The warning output can be selected so that a warning is generated when any one of the above is detected (warning output logic selection).

This function automatically corrects the current so that the output current does not change with the fluctuation of the power supply voltage and load during control. This is ideal for heaters that use precious-metals, such as platinum, molybdenum, tungsten, tantalum, super kanthal and others where the resistance changes greatly (about 10 times) by changes in the temperature.

This function outputs an effective power value proportional to the input, even when the power voltage and load fluctuate during control.
This is suitable for heaters that use silicon carbide and SILICONIT where the resistance value increases with the temperature change and secular change.

This function automatically corrects the voltage so that the output voltage does not change with the fluctuation of the power supply voltage and load during control.

This function automatically corrects the current so that the output current does not increase beyond the set current. The setting range is within 30 to 100% of the rated current.
* Since the inrush current cannot be suppressed for a load with a high inrush current, use in combination with the soft-start function.

This function generates a warning when the output current becomes more than 1.2 times the rated current.

In the case of a fast acting fuse with a micro switch, this function outputs a warning when a fuse is disconnected.